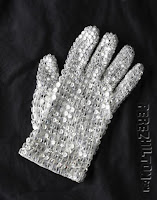 This was the glove Michael Jackson wore on his 1984 Victory Tour and for Los Angeles resident Wanda Kelley, it was worth $190,000!

After making the winning bid at an auction run by Julien's Auction at Planet Hollywood in Las Vegas, Kelley said, "Let's just say, I wasn't walking out of here without that glove."

The Swarovski-crystal-studded glove was expected to sell between $20,000 and $30,000 at the auction however, according to Darren Julien, the response from bidders was "unlike anything we've ever experienced."

He added that "People flew in from Asia, Russia, all over. Now that he's gone, we now realize the true legend we lost."