11 Characteristics of People Who Lie According to Psychology

Hello friend Mas Dezta, lying is a statement that states something that is not true with the aim of giving the listener a sense of trust. Although lying is not something that rarely happens, but there are still many people who have difficulty detecting lies. According to psychology, someone who lies tends to have easily recognizable traits. Then, what are the characteristics of lying according to Psychology? Check out the explanation! 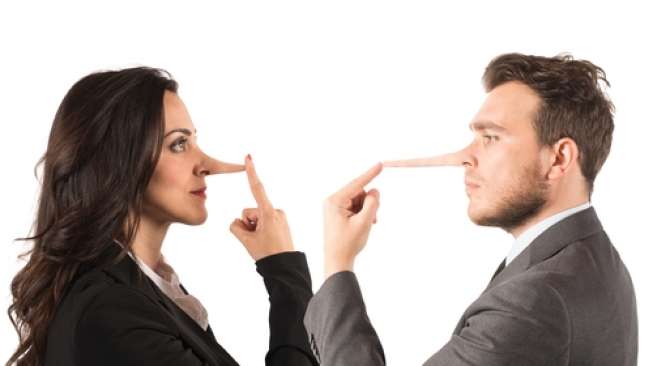 1. Tends to Move To Quickly

People who lie will tend to move their heads suddenly when asked a question. For example, tilting the head back, bowing to or tilting his head to the side. They make this gesture before giving a Statement on the given question.

Most people will stand very stiffly when lying as a response the body gives when preparing for a "Confrontation." When talking to other people, he will move his body naturally from time to time. When a person's body is very stiff when speaking or barely moves, then he is most likely hiding something.

3. Repeating a lot of words or sentences

People who lie will repeat a lot of words or sentences to convince the other person or himself. The person is validating the lie in his brain so that he also believes it to be the truth. The repetition of this word or sentence is also a trick to buy time so the liar can make up another lie to cover up his mistake.

There are times when a liar will speak less. This is because they have not prepared a scenario or story to cover up the lie. So, when the other person asks to tell a very detailed incident, he tends to be quiet and looks restless.

Liars will continue to fabricate stories while lying and their words don't include too many unnecessary details to explain. The goal is to convince others and himself.

The language used is more from the point of view of a third person like him or them, and avoids using the word I to prevent him from being involved in an event.

6. Trying to Shut His Mouth

The undoubted feature of lying according to Psychology is covering his mouth when speaking. As if they were reluctant to answer certain questions. This body language indicates someone who doesn't want to reveal something, doesn't want to tell the truth, and cuts off the conversation.

Contradictory gestures or body language are the hallmarks of a person who is lying. While honest people have more coordinated language or gestures.

A person's tone of voice can detect lies. But the use of this unusual tone of voice must take into account a person's cultural background to prove that he is lying or not.

The characteristics of people who lie are avoiding or not daring to make eye contact. However, it is not uncommon for liars to use intense eye contact without blinking because they are trying to manipulate and control the other person.

Sometimes, adults who lie will look like children who are lying. Like licking his lips, looking at his nails and moving his feet or hands too much. This behavior is the body's response to the anxiety that hit, so that the overall blood flow of the body becomes not smooth. The movement comes naturally to circulate more blood throughout his body.

This is a behavior done by a liar to divert attention from himself. He hoped the discussion would focus on other people, so that he could escape the truth. This is suspect, especially when the liar insists on pointing out someone else.

Thus the article about the characteristics of people who lie according to Psychology. May be useful! Mimin ends thank you and greetings.